“OMG! You’re a genius!” I said to him and immediately we had created a Facebook event.

We’ve decided upon the ice-cream parlors number (3), the starting point (Buza Ice Cream – they are known for their flavored cones, which requires the higher level of hunger), the course (continuing to ‘Allora’ on Marmorek and finishing at ‘Gala’ on King George) and friends were invited.

Surprisingly (or nor), people were very keen to join us and even suggested to add another place (‘Sicilian Ice Cream’ on Ibn Gabirol, between ‘Allora’ and ‘Gala’) cause three is obviously not enough, so they said.

We gathered (at this point, seven of us) outside ‘Buza’, which located on 91st Hashmonaim street. After we tried almost the entire variety of flavors, each and everyone chose his preferred flavor and cone (you can choose from a regular cone, salted chocolate cone, and cinnamon and cardamom cone). Since I already have tried the salted chocolate cone before (amazing and beautiful!), I decided to try the cinnamon cardamom cone this time. At this point, one need to think of what flavors goes with the spiciness in the cone choseמ, it has to be an accurate choice. After a short indecision, the flavors chosen were pistachio and ‘White Queen’ – coconut, white chocolate and coffee (which wasn’t really present, in my opinion). The choice turned out to be a very good match to the cone, which the spices in it had a really good and balanced flavor, but at the same time, didn’t overpower the ice cream itself. It feels like a crispy-soft cookie that slowly dissolves from the ice cream moisture. 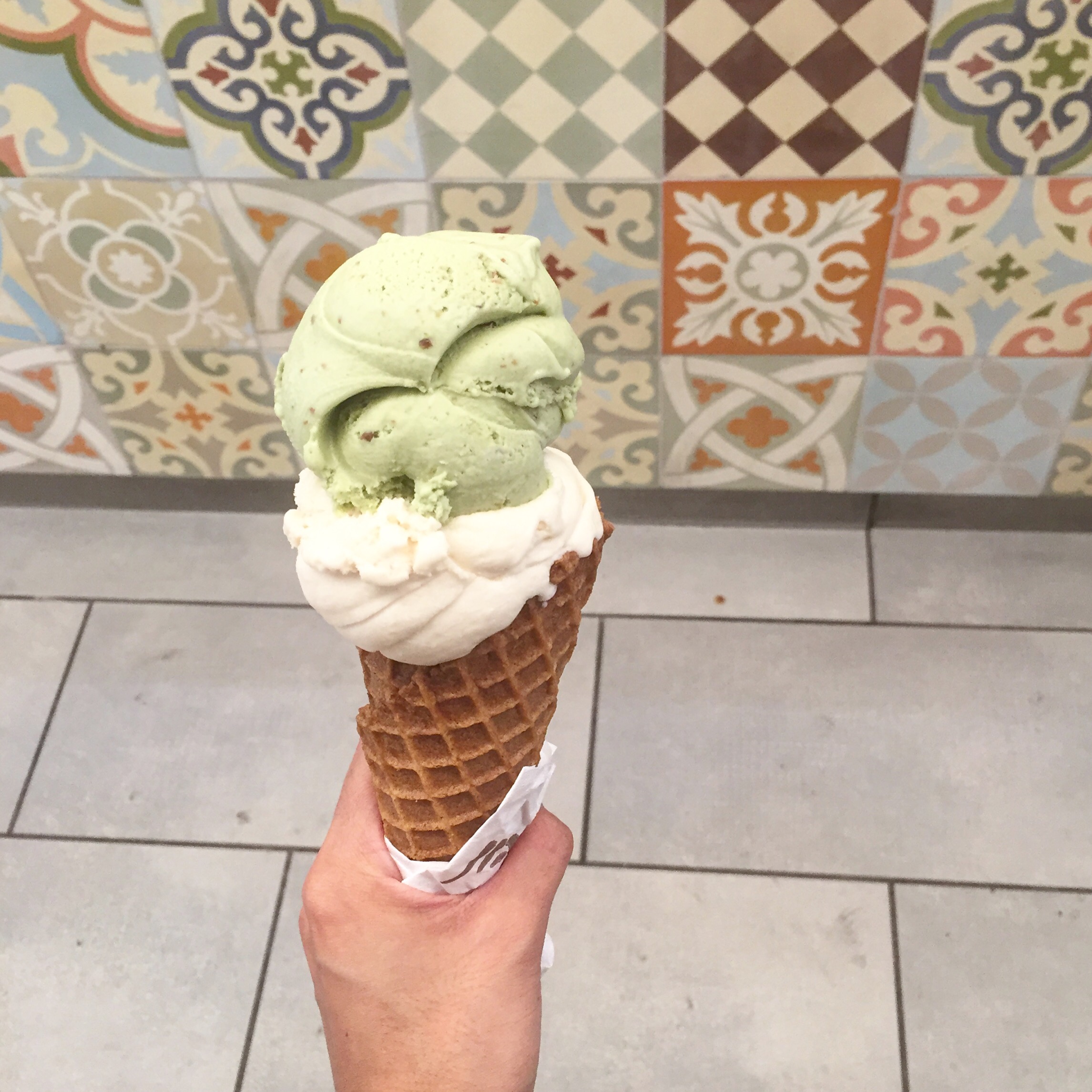 We sat at Givon yard. At first, it was really hot because of the walking, but after a few minutes, with the coolness of the ice cream that spread inside the body and the evening wind that started to blow very gently, the perfect conditions to eating ice cream were made.

Then we got to ‘Allora’, which is 6 minutes walk away from ‘Buza’, and I was so full already from the great ice cream I had just finished. The place was really small and couldn’t have us all at once so we entered in turns. I examined carefully all of the flavors to see if one of them penetrates my walls of sugar and cream, but none felt right. I tried the vegan section that included soy milk based ice creams and sorbets and I pondered over the melon flavor but eventually decided to skip this stop. We still have two more stops ahead. Some of the other crawl participants also gave up on a scoop in this stop. The others chose their flavors and we took it and sat on Habima square. I tried from one of the participants a flavor called Cremino which reminded me the flavor og Kinder Bueno. And one flavored lemon pie which was very heavy but delivered in terms of name and tasted exactly like lemon pie. Others were already struggeling with the currant amount of ice cream, so we’ve decided to skip ‘Sicilian Ice Craem’ and go straight to ‘Gala’. At that time, I was too full for either of them.

So we continued walking, all the cheerful bunch, to the next place while talking, of course, about ice cream. We arrive at ‘Gala’ – a small ice cream place on King George Street (which is closed by now) who offers also frozen yogurt, and even vegan frozen yogurt. I tried a few flavored I was intrigued by (like Nutella and Caramelized Almonds, Lemon Meringue, and Apple Pie), but the heaviness I felt made its marks and I struggled hard to choose. That feeling of fullness, maybe, affected my perception, but none of the flavors felt right. Eventually, I decided to share a cup of Nutella and Caramelized Almonds and Pavlova ice cream. Given that choice, it’s clear I was not in the right mind, because what sane person combines Nutella and pavlova together? Indeed, it turned out to be a mistake. The Pavlova flavor was too sweet and obviously didn’t work out with the Nutella-Almond flavor at all, which was nice but not that great itself.

The most quality ice cream at this crawl to my taste was undoubtedly ‘Buza’, which was the first one to be tried out. The variety is wide, the flavors are interesting and balanced, not overly sweet and they also have a diverse choice of very good sorbet flavors for the vegans among us.

Recommendations and conclusions for the next crawl:

To be noted, this tour is not for the faint-hearted, sensitive-stomach, or people without a huge love for ice cream. It can be understood that this was my dinner for that day; apart of the fullness I felt, it was a very nice, tasty and cooling experience. Could be a fun recreation and a different one (yet again having a beer in some random ber?) which suits the steaming and moist Tel Aviv summer night. Highly recommended!